Like all business sectors, ports have a host of questions about what Brexit will mean to them, most of which cannot be answered in the short term. The message from the Department for Transport is ‘business as usual’ and ports will meet officials this month for further briefing and a chance to identify and discuss challenges and opportunities.

Ports reflect changes in the economy and the levels of activity in sectors such as manufacturing and construction will quickly feed through into port traffic figures. A potentially more immediate issue affecting ferry ports will be future policy on the movement of people and whether controls at borders may have to change to deliver new policies. Whatever happens, it is important that the UK’s efficient ports can continue to facilitate trade, ensuring smooth flows of goods and passengers with border controls that support trade.

Decisions will also need to be made about legislation. By coincidence, on the Monday following the referendum result agreement was reached in Brussels on the Port Services Regulation, a piece of legislation very much opposed by the UK. The future of this and a host of other measures will largely depend on policy under the new Prime Minister and whether, for example, future strategy will see the UK as part of the Single Market. This in itself could trigger off a range of legislative responsibilities. Some ports are also due funding under the EU’s Transport Networks (TEN-T) programme so there will be longer term legislative compliance obligations for them to be considered.

Ports are about business and connectivity. All in all there will need to be adjustments to the new circumstances and we look forward to working closely with government to get the best possible deal.

While some huge political questions are being debated, the business of moving goods in and out of the country continues and the BPA continues to be concerned about the future quality of the UK’s road and rail networks, especially road.

Speaking at a recent conference, the Director of the BPA, David Whitehead, said,

“While the UK has a mature and generally adequate transport network, big differences are emerging between the qualities of the strategic network for roads and the local roads network.”

Using figures produced by the Institute of Civil Engineering (ICE) he showed that while the strategic network receives an ‘adequate for now’ rating, local networks were considered ‘at risk’.

The setting up of the National Infrastructure Commission will, hopefully, create new opportunities and ports are now looking for a more formal tie in with the NIC and the Department for Transport (DfT) whereby there can be direct contact with Ministers on infrastructure needs.  There have been hints from the DfT that freight is being looked at afresh and ports will be more than willing to play their part in any new initiative that can address such a fundamental part of the economy. 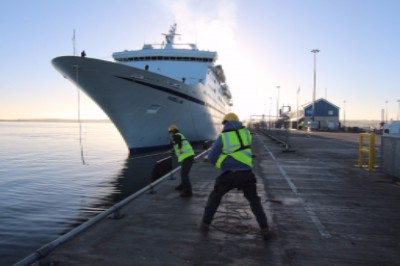 The BPA continues its close work with the devolved Assemblies particularly as they adjust to the impacts of Brexit which are likely to vary around the UK.

At the end of June we held a well attended reception for new Assembly Members in Wales where we were also able to discuss a new ports agenda – an agenda which takes on special significance with the publication of the Wales Bill which largely devolves ports policy to the Welsh Government.

In Scotland there will be a reception for MSPs in November, an event that brings together the Scottish maritime sector whose ports make the second biggest individual contribution to the economy of any part of the UK. The ports sector which makes the biggest individual contribution is in Northern Ireland where the impacts of Brexit create some different challenges with ports competing directly with the south.

The future is going to be busy on all these fronts and it will be vital that all the administrations work closely with the UK government and industry as solutions are brokered.